< Tulip Mania and the App Boom | Farmington Church of Christ: Logo in Action >

During college I fell in love with a sport called ultimate. I was pretty decent at it and enjoyed challenging myself to constantly get better. That was back in 2001, and at the time there wasn’t much in the way of ultimate news — except what the Ultimate Players Association would put out in their quarterly magazine and some old message boards.

In 2004, I used what I had learned of html  and newspaper writing to make a blog on the blogger platform. It did fairly well and was decently read. I kept it up through my graduate studies, but found myself with little time after entering the job force.

Several years later in 2011, after working in Washington D.C. as a Public Relations Manager, I rebooted the blog as a full blown news site as there was still precious little information about ultimate news. In an effort to monetize the site and make it self-sufficient, I made a digital preseason magazine for the 2012 year along with video sales and ad display. The magazine was integrated into the website’s store and was delivered digitally via cloud server.

The magazine was profitable, selling over 200 copies in a nascent niche. Unfortunately, Ozark Ultimate was hamstrung as my time was required at Red Rook Royal and competitors with a national focus sprang up. However, its legacy and initial goal of bringing timely news to a quickly growing sport were effective.

*While the original was digitally delivered, it was in pdf and flash format. The pages from the version below are unchanged from the original. However, it is now in html 5.0. March of progress and all. 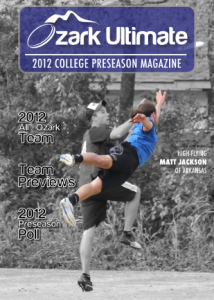 < Tulip Mania and the App Boom | Farmington Church of Christ: Logo in Action >

Free Basics in India or How Not to do Country-Wide Public Relations By Will on Feb 8, 2016