< Farmington Church of Christ: Logo in Action | Free Basics in India or How Not to do Country-Wide Public Relations >

Every year the Super Bowl is one of the most watched programs. It draws all sorts of people, even those who do not normally watch sports programming, with its pageantry and shareable commercials.

This year, the NFL has been pushing the advertising and marketing of the Super Bowl extra hard as it is the 50th anniversary. This makes a lot of sense as prominent years are strong rallying points, shows brand strength, and are easier to sell. The build up to Super Bowl 50 has shown us ads with football history, talked about how football is family, and introduced the official sponsors.

The one thing that is missing though is a commercial that talks about the change from the traditional Roman numeral logos of the Super Bowl to the more familiar Arabic numerals this year.

I get it, the L does not work with some of the traditional logos, and certainly does not work with the recent trophy logo that has been repeated the last few years. More importantly, the letter L is usually associated with the opposite of sports prowess and what the Super Bowl represents.

So below Red Rook Royal has put together a little storyboard and script for an explainer commercial of Super Bowl 50 (L). 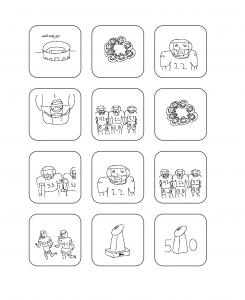 Frame 1. Establishing shot of Super Bowl crowd in the stadium

Frame 2. Secondary establishing shot of the team in pregame huddle

Player 1 (speaks in hoarse deep voice) – We are here at the Super Bowl! But we aren’t done.

Frame 3. Close up of player in huddle

Player 1 – Now we have to play tougher.

Frame 5. Medium shot of Player 1 in the huddle

Frame 6. Back to over head huddle shot

Player 1 – Especially if we want to get that L!

Frame 7. Over the shoulder shot to Player 2

Frame 8. Over the shoulder shot to Player 1

Frame 9. Medium shot of Player 1 with team huddle in disbelief

Frame 10. Medium shot outside the huddle as it breaks and player run towards the field

Frame 11. Super Bowl logo with an L pops up with field in background

Announcer – The only time any team has ever wanted an L.

*All trademarks are owned by their respective owners. Red Rook Royal is not associated with the NFL, the teams, or their companies. We just thought this was an interesting concept.

< Farmington Church of Christ: Logo in Action | Free Basics in India or How Not to do Country-Wide Public Relations >

Free Basics in India or How Not to do Country-Wide Public Relations By Will on Feb 8, 2016